Chiang Mai is home to the ancient kingdom of Lanna, and is situated in Northern Thailand. With its very distinct culture, comfortable climate, unbelievably mountainous scenery and exotic food, you can see why it is known as the Rose of the North. The food in Chiang Mai is known as Lanna Cuisine, a type of food which is very distinctively different from the rest of Thailand. Because of its bordering of Myanmar and China, you see a very distinctive food culture which borrows from its northern neighbours and how all these amalgamate and produce what we know as Lanna cuisine.

Nam Ngiao is a a type of soup noodle which almost resembles a curry noodle, originating from the Tai Yai people of the Shan Tribes of Myanmar. As Chiang Mai has Myanmar to its North, this dish is eaten quite widely there through its cultural influences in ingredients and spices. This spicy noodle consists of khanom chin noodles, tomatoes, pickled vegetables, chilli, garlic and most importantly, pork rinds (not in picture). The key ingredient in this dish is the tua nao (ถั่วเน่า), a type of fermented soy bean which gives it a unique pungent flavour.

Chiang Mai is situated on the northern part of Thailand, bordering Myanmar, and one of their most profound influences would be the Khao Soi, also known as Burmese curry. The Khao Soi, or “cut rice” in Thai, is slightly different from the Burmese and Northern Lao versions, but only by slightly. The dish consists of egg noodles cooked two ways, one part boiled, and the other part deep fried. This gives the dish a very distinctive texture of softness and crunch. The coconut-based curry soup has a peanutty and sweet flavour to it, quite different from most curries you find in Southeast Asia, and is quite close to a massaman curry. This dish is normally served with a side of lime, pickled mustard greens, shallot, and chilli oil or chilli flakes as condiments. Chicken is usually the main protein, but a variation of different meats like beef, when prepared by the Muslim population and is known as Khao Soi Islam (ร้านข้าวซอยอิสลาม), and even blood pudding known as lueat (เลือด).

Tago or tako (ตะโก้) is a simple dessert which is made from sweetened rice starch to form a rice pudding. The bottom is normally made with sweetened rice pudding, pandan (screwpine) leaves and fruit, either from young coconut flesh or lychee, and is finished with spoonfuls of coconut cream layered on the top. This snack is traditionally served in banana leaves.

Mu Ping are a type of barbecued pork skewers, which are marinated with coriander root, garlic, pepper and most importantly, coconut milk. Although a dish originally from Bangkok, a Central Thai cuisine dish, it can be found quite commonly throughout Thailand. This dish is also served with rice on the side and dipped in Nam Jim Chaeo (น้ำจิ้มแจ่ว), a spicy sauce made from dry roasted glutinous rice. Because of how easily transportable this dish is, it is commonly had by commuters.

Sai Krok Isan is a type of fermented sausage from Northeastern Thai cuisine, also known as Isan Cuisine, which is made with pork and rice, and eaten with chilli, cabbage and ginger. These unique sausage balls are easily recognisable by its bite sizes shape, but what adds to it is that i uses cooked rice in its recipe, giving it quite a hearty texture. Sai Krok Isan is usually not spicy, but some variations that you find in Chiang Mai may have them spicy as well.

Sai Oua is a type of spicy sausage from Northern Thai cuisine, a local speciality of Chiang Mai. These sausages are made a variety of different spices, with a profound aroma of lemongrass, and with other ingredients like red curry paste, galangal, turmeric and chilli. This sausage is usually quite spicy and tends to be a bit leaner, but there are also versions with a higher fat content for those that prefer a juicy bite. You will instantly recognise it on the streets as rolled up sausages.

A minced pork and sticky rice sausage with a unique sour taste from a 2 day fermentation process. Made from lean pork mince, pork skin and cooked sticky rice, this sausage is flavoured with garlic, chilli and sugar. This meaty treat is not so different to the better known Isan sausage from nearby North East regions. It is also one of the few Northern Thai Cuisine that is common to Bangkok streets and is often found sizzling and skewered over hot charcoals at city street food vendors. While Naem can be eaten raw (like ham) I would stick with the cooked option for first timers.

The word tod (ทอด) in Thai is generally used for food that has been fried, and in this case, banana fritters. What is special about this version of banana fritters compared to most of Southeast Asia is the batter used, which is made from sticky rice. The resulting coating gives it an interesting chewy texture and flavour. This snack is also usually had with a ‘bird’s nest’ made from deep fried sticky rice flour.

Tua Mai (ตัวไหม) is the Thai name for silkworms, and is considered a local delicacy. This fried insect  actually tastes much better than you would imagine. It has a crispy texture and a slight savoury and sweet bite, almost candy-like. Its cheap and high in protein and its something that you would have to try at least once in a lifetime, you may actually like it.

Nam prik num is a kind of chilli paste and sauce that is used for cooking and dipping. The sauce is predominantly made from green chillies, cilantro, onion and garlic, and is used as a condiment for most savoury snacks. This is commonly used as a dip for pork rinds, but is also used in all sorts of cooking and.

Don’t let the shape of these things fool you into thinking they are doughnuts, when in fact, they are so much more.  Although these rings of pastry look like doughnuts, they are actually made from sticky rice. This gives the snack a bit of a chewy texture, as opposed to a fluffy one, and is glazed in maltose, giving it a really sweet and sticky finish.

Phuek Tod are deep fried fritters made from taro, also known as phuek (เผือก). The taro is first cubed into small pieces and deep fried in sticky rice batter. The resulting snack has a nice crunch with the powdery texture from the taro. This dish is usually served with a spicy condiment sauce known as a namprik (น้ำพริก).

This dish is a slow braised pork influenced by Chinese cuisine, where the meat is boiled with eggs and blood pudding on a low heat in a sweet broth made with star anise, soy sauce and dark soy sauce. Most Chinese Thai families will be familiar with this dish.

Rice cracker snacks are a common sight throughout Thailand, and the variety you find in Chiang Mai always uses sticky rice, giving it a slightly different interesting texture. These snacks usually have a sweet and savoury finish, and is made using sticky rice, watermelon juice and brown or palm sugar. 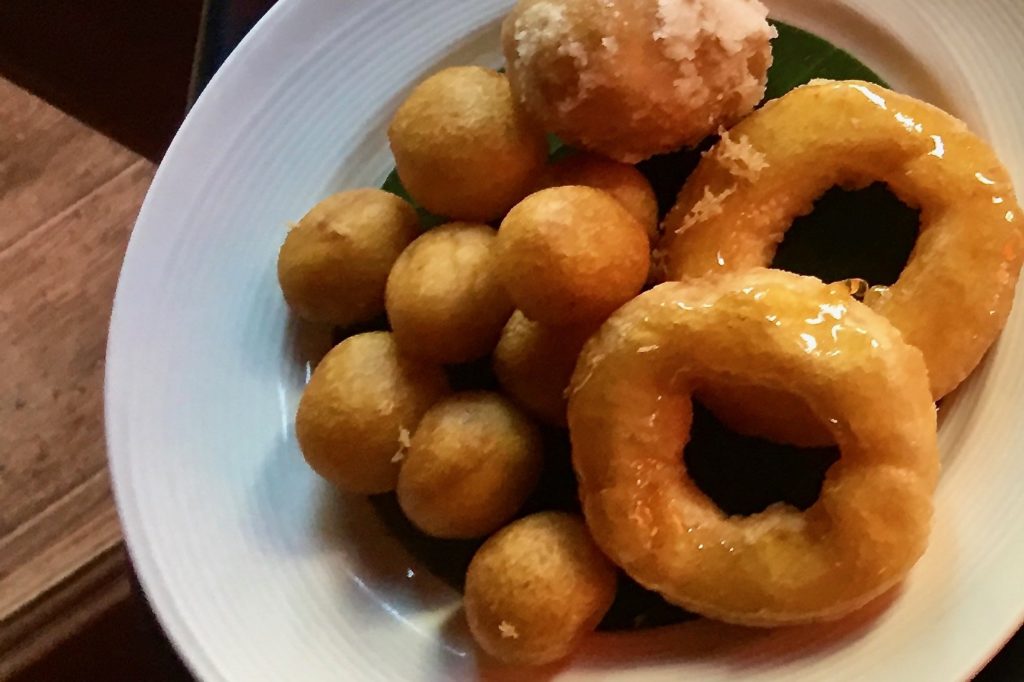 Sweet potato balls are also commonly found throughout as they are light, fluffy and coated with sticky rice flour. The little dough balls are made from sticky rice flour mixed with sweet potato, and then deep fried into little balls of fluff. Remember to eat them while they’re hot as they lose their crunch when left out too long.

Just take a gander at the local farmer’s market or wet market to savour a melting pot of cultures within Thailand itself, and you will see how different Lanna Cuisine is compared to its other counterparts. Because its located in a mountainous region, the flavours aver very much herb derived. The other thing you will notice is that sticky rice is used in everything, which gives it a certain fragrant flavour and chewy texture. There are so many varieties of snacks you will find in a farmer’s market in Chiang Mai, be it meat eaters of vegetarians. You can head over to Siri Wattana Market 0r Muang Mai Market to experience this for yourself.

Nicholas Ng is a restaurant critic, travelogue and opinion columnist which is curated on Food For Thought. He has been a freelance writer for 10 years and has previously worked as a lawyer. He currently is the Principal Counsultant of A Thoughtfull Consultancy.